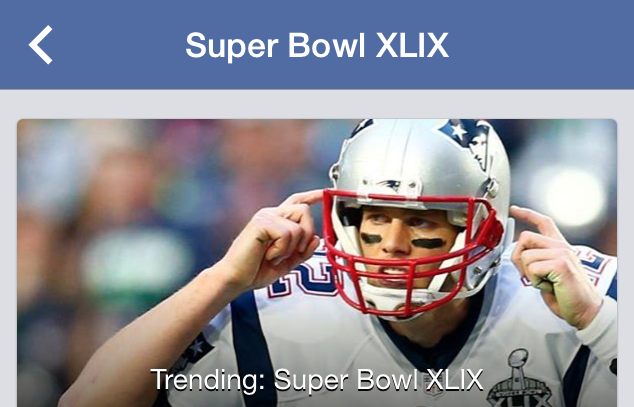 There was a lot of hype going into SuperBowl XLIX in regards to how Facebook ads would be integrated with the big game. Prior to kickoff, there were rumors that Facebook would finally introduce some real time keyword based ads tailored to the temperaments of fans as they commented and posted on Facebook during the game.

After monitoring the game from Los Angeles, it was surprising to see the lack of advertisers who seamlessly integrated their SuperBowl ads with social media during the event. While traditional media has modified their creative process to include social with their ads, there is a growing need to engage individuals beyond the ad, capitalizing on advertisers investment of $4.5 million dollar price per 30 second commercial. In regards to social media integration, it was reported that 50% of Super Bowl ads utilized hashtags. Facebook claimed the SuperBowl was being discussed by 65 million people and generated 265 million posts, comments and likes. Twitter claimed that it was the most tweeted SuperBowl every with 28.4 million tweets during the broadcast. The rise of social ads has changed the social media landscape when it comes to Super Bowl advertisers. Here is quick recap of the companies that we believe stood out and capitalized on Facebook ads along with a few advertisers that fumbled their opportunity during the big game.

Nationwide took the MVP award for the big game as they went 2 for 2 with commercials and almost instantaneous Facebook ads that mirrored their SuperBowl ads. Their ads “Make Safe Happen” and “Invisible Mindy” were almost immediately followed up with Facebook ads that engaged individuals with the ads and included a quick call to action.

This campaign presented a strong message about child safety along with a clear call to action that enabled parents to learn more about how to protect their children. They utilized the Facebook video ads and also included a clear link to learn more via their website. 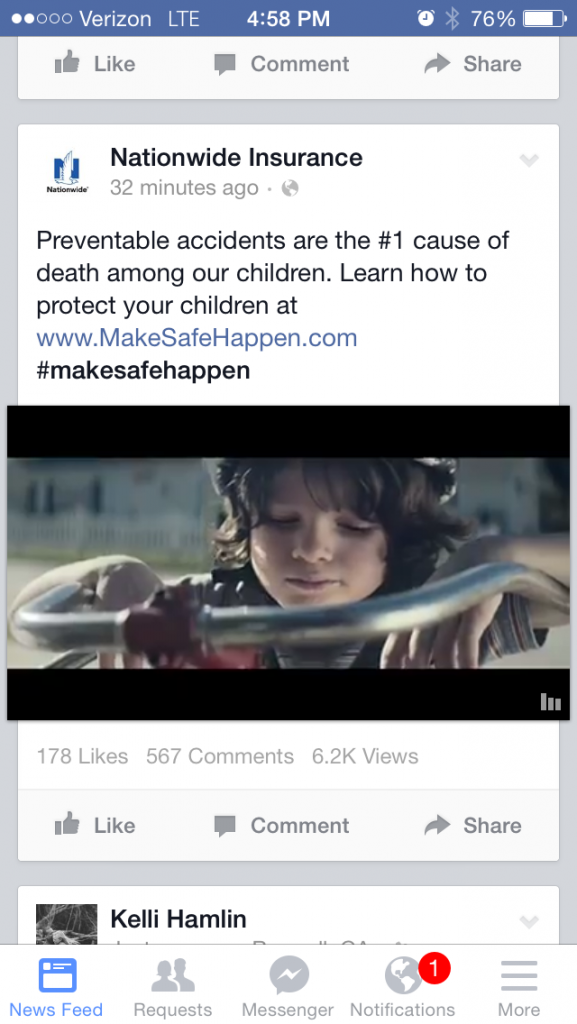 The Invisible Mindy campaign did a pre-game warm up by promoting their commercial prior to the game. After the ad ran during the SuperBowl, they began running Facebook video ads regarding their ad along with a link to learn more. If you’re interested in seeing their response rate for the Facebook ads, check out the Invisible Mindy Super Bowl Facebook Ad results via Bit.ly analytics. 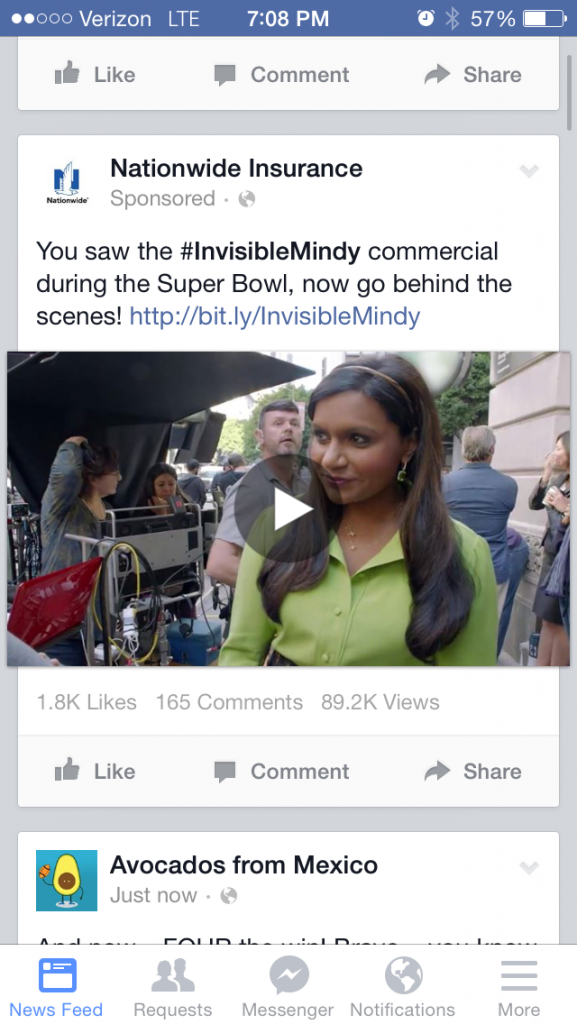 The Game of War ads featuring Kate Upton has been promoted heavily via the web for the last few months. However, during the SuperBowl, they ran a new version featuring Kate Upton rising from a bath to rule a kingdom that is under siege. They ran a Facebook video ad that mirrored the Super Bowl commercial and had already generated over 300,000 views in a few short hours. The only downside is that these didn’t appear to be running immediately after their Super Bowl commercial, but instead the next morning. 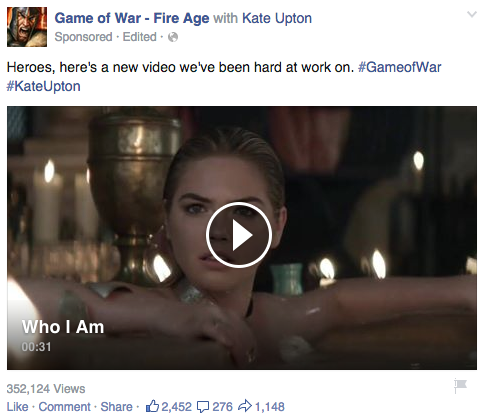 Dove Men ran a heart warming campaign called “Real Strength” that focused on children calling out “Daddy” in a variety of real life situations. Their Facebook ads began running almost minutes after the commercial played and provided a link to watch the video again on YouTube, not Facebook videos. As expected, the response rate was much lower than the Nationwide campaign (view the Dove Facebook ad click through rates via Bit.ly analytics) as it generated almost 10x more clicks in comparison with the Dove campaign. The lesson here, use Facebook videos when you can as they actively promote those over YouTube videos. 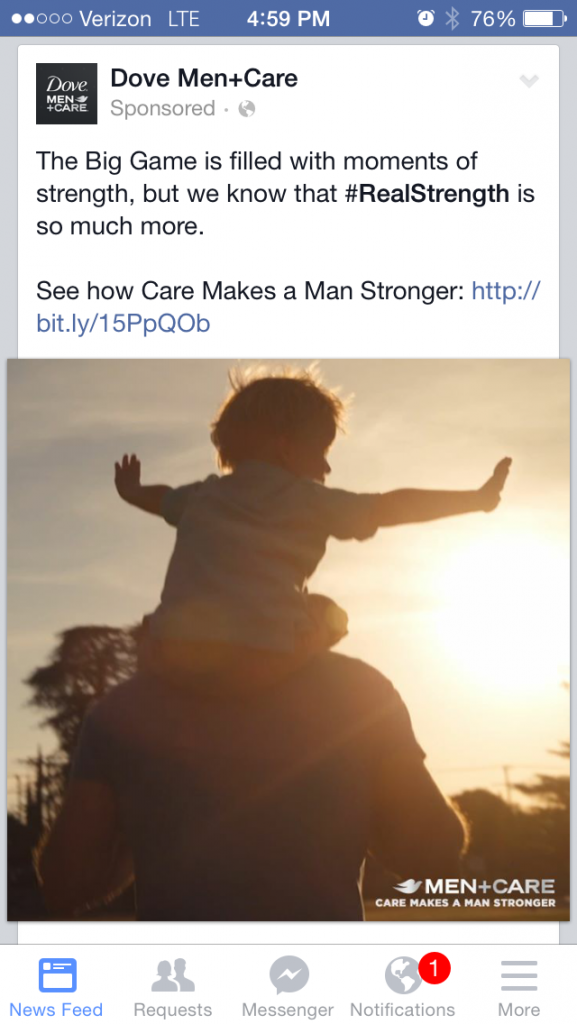 Here are a few of the Super Bowl advertisers that attempted to run Facebook ads during the game but seemed to fumbled the ball during the process.

This campaign included a clever ad regarding the “First Draft Ever” featuring Jerry Rice and Doug Flutie. While the commercial included a hashtag #firstdraftever, they failed to promote it via Facebook ads and simply just posted SuperBowl related comments via social media. The end result… a missed opportunity for this creative ad that was almost as bad as Pete Carroll’s call to throw instead of run from the one yard line. 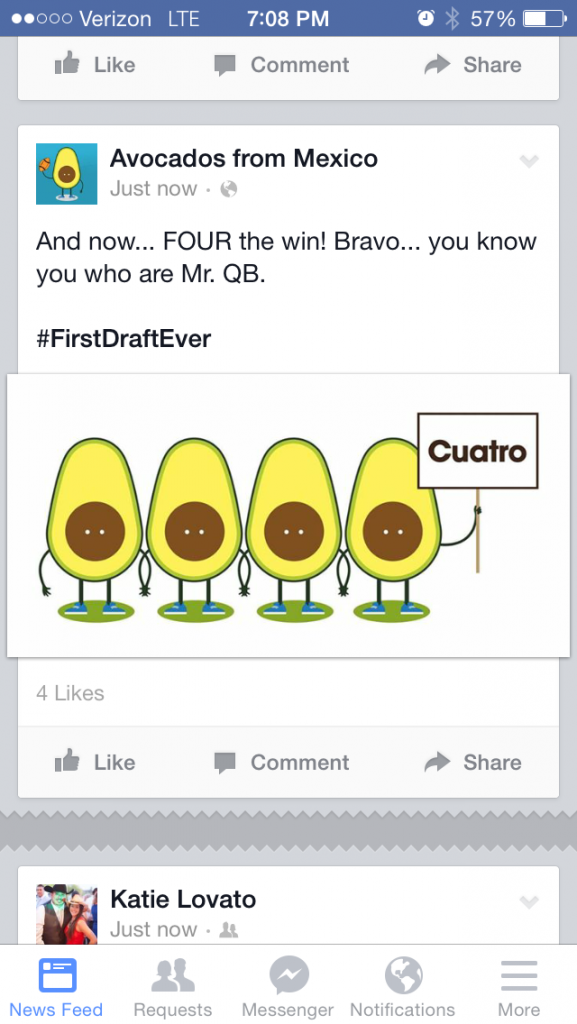 TurboTax ran a funny commercial promoting how things might have been different if England had simply offered “No Tax” to Americans during the Boston Tea Party. While the ad was creative and made a great point, TurboTax failed to take advantage of their opportunity of engagement for their ad and instead, the only ads shown were traditional TurboTax ads which had no correlation with their Super Bowl ads. 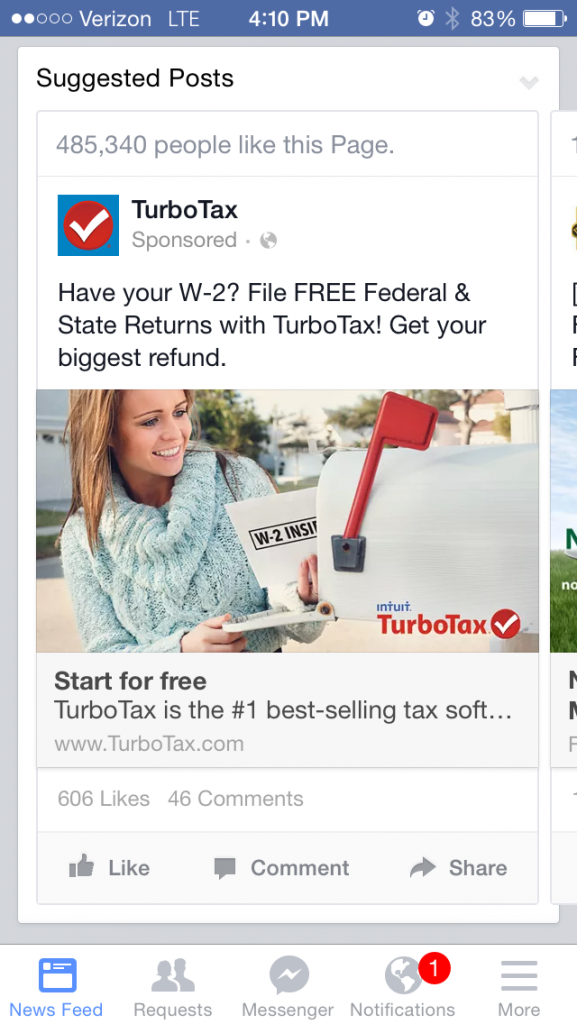 T-Mobile ran a fun campaign promoting the ability for customers to keep their unused data or make calls while on Wifi. While the Kardashian ad was promoted prior to the SuperBowl, after the commercial ran, there were no promotions or tie-ins for this ad via Facebook ads. Both ads included a Facebook logo to promote users to visit its fan page. While this option is better than nothing, its almost essentially a worthless call to action. T-Mobile placed their hope in celebrities being able to bring the social power instead of making it happen themselves via Facebook ads. 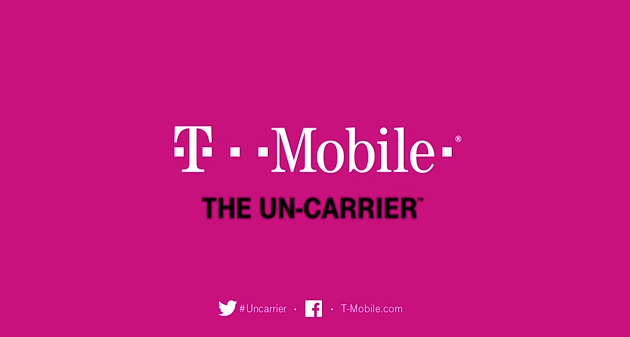 While Universal has run a variety of Facebook video ads for the upcoming film “Fifty Shades of Grey”, the promotion for Pitch Perfect 2 had virtually no push via Facebook ads. Now this may have been because the account being used to monitor ads was not from a high school girl, so targeting might have keep us in the dark. In the end, Universal eventually promoted the video via a post on their Facebook fan page which has done very well via the strong social media push behind the movie. 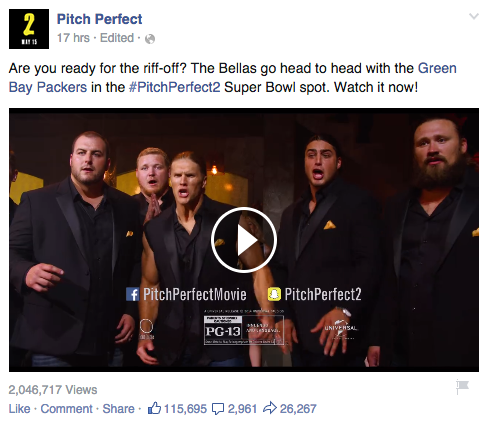 The heart warming Budweiser commercial about a lost puppy finding his way back home seemed to win over most of America. However, when it came to Facebook ads, it looked as if the puppy and Budweiser never made it back home. Already a social media juggernaut, Budweiser promoted the video via traditional social media and publicity. If 65 Million individuals were actively posting about the Super Bowl and this video was voted the #1 commercial, then the 29 Million views Budweiser received on its Facebook video could have easily been doubled or tripped. The failure to promote the ads may have been from Facebook’s ad policies or from a lack of Facebook advertising strategy. Either way, it was a huge opportunity that appeared to be squandered while individuals were watching the game and engaging via Facebook. 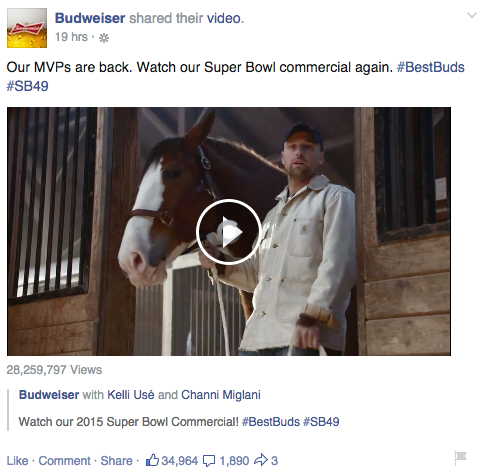 A quick look at the stats. It’s estimated that there were 112 million viewers watching the Super Bowl this year. Facebook estimated that there were 65 million people posting on Facebook about the Super Bowl and 265 million people commenting, liking and sharing those posts to others on Facebook. With a potential audience of almost double what is actually watching the big game, its surprising to see how many advertisers essentially had no real-time options to promote their ads, content or engage with fans via Facebook advertising during the game. Even though these companies may have a strong social media presence and leveraged tools such as hashtags during their commercials, most of the advertisers listed below missed a huge opportunity by failing to promote their ads to potential fans and new customers via Facebook ads during the big game.

Disclaimer: Facebook does allow for ad targeting, which means some of the advertisers may have run Facebook ads but since the accounts being used to monitor Facebook during the Super Bowl did not meet their criteria, the ads were not shown. During the event, all Facebook fan pages of the advertisers were “liked” in real time as if other users were, so we felt this process would mimic what the general public would do while watching the ads. There were also posts and comments that utilized relevant hashtags during the game. The results above came from the response of our efforts.

Have a difference of opinion about the article?
Leave your feedback or comments below.