You are here: Home / Facebook / No Crystal Ball Needed, These Seven Graphs Show the Future of Facebook

eMarketer recently released data that give marketers helpful insights on Facebook users’ demographics and habits, data that could be used as leverage when designing ads and targeting an audience. If you’ve ever wondered which groups of people use Facebook more often, which devices they prefer to use when accessing Facebook, or which social media sites is the most used by Americans, these data will be useful to you. Below are the seven important charts every marketer should see. 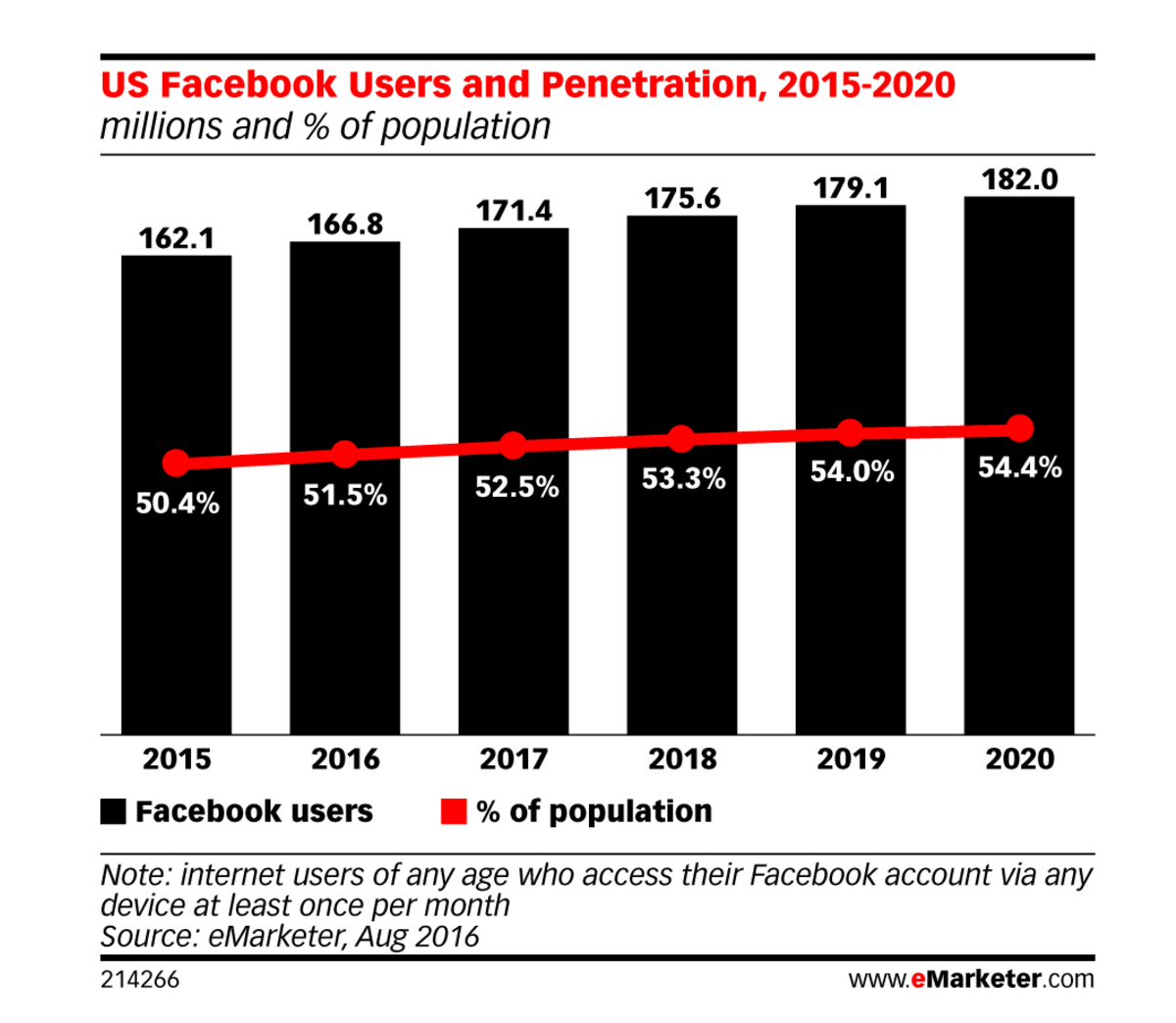 This graph shows that more than half of Americans use Facebook, a number that has shown steady increase and predicted to continue in the years to come. The graph also proves that Facebook, a powerful platform, prevails in American lives, rivaling TV and radio in reaching a larger audience. Because more than half of Americans use Facebook, marketers can reach more than half of the American population. Thus, Facebook gives marketers the advantage of, for example, advertising at the Super Bowl, a highly coveted opportunity because of its millions of viewers. While the Super Bowl only occurs once a year, the opportunity to reach as much of an audience occurs daily on Facebook. 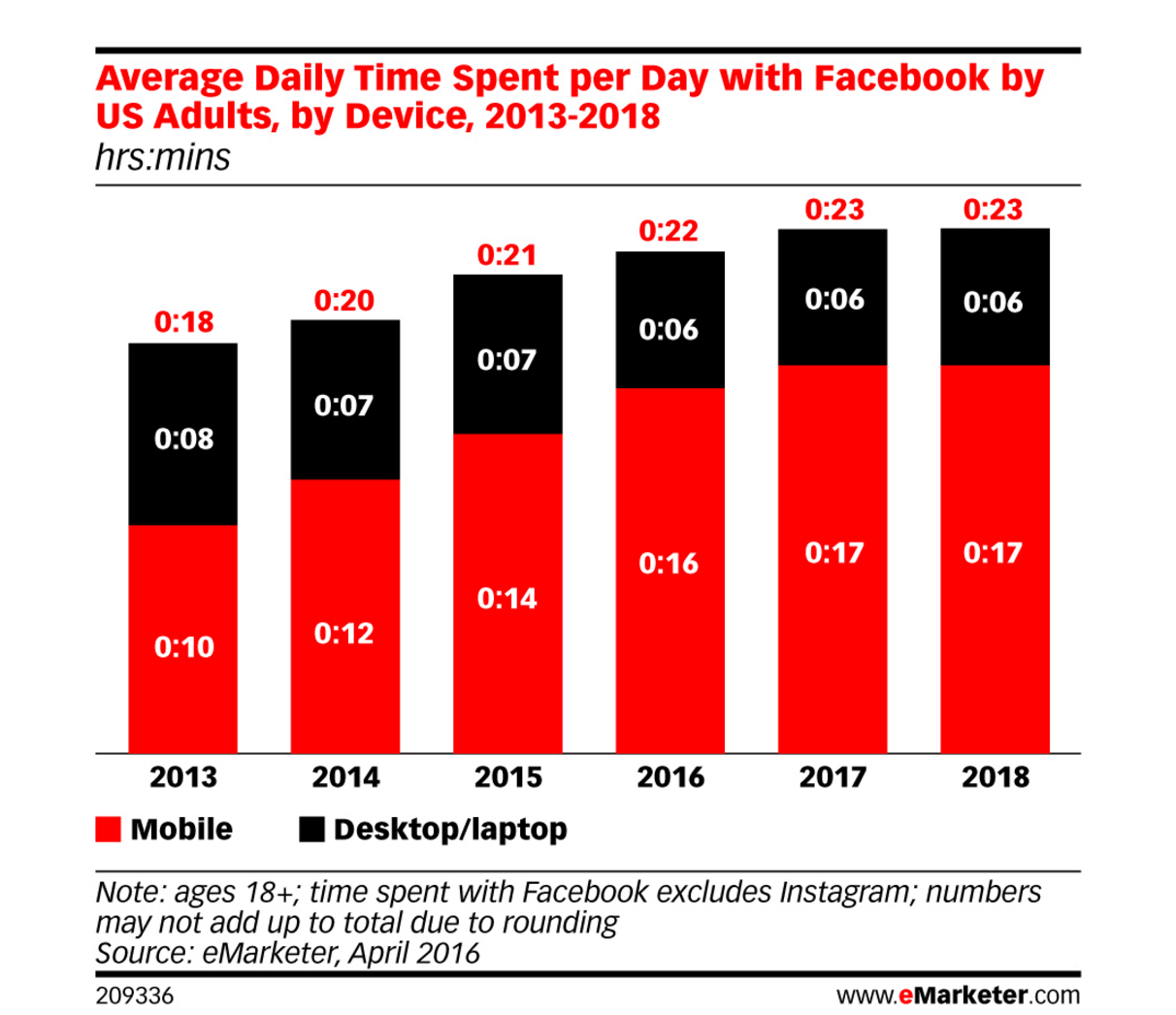 Although the data show that users’ time on Facebook is plateauing, Facebook is changing this. For example, Facebook’s experimentation with instant articles, virtual reality and 360 ads, and Facebook live encourages users to stay longer on the website.

It’s also important to observe that the years 2013-2016 show slow but visible growth. The plateau will occur in 2017 and 2018. This means that while the past four years have shown growth, the plateau for 2017 and 2018 is a mere prediction which may or may not occur. If marketers continue to release 36o video ads and Facebook live videos, time spent on Facebook will likely increase.

3. Users 35 Years and Older Compose More Than Half of Facebook’s Users 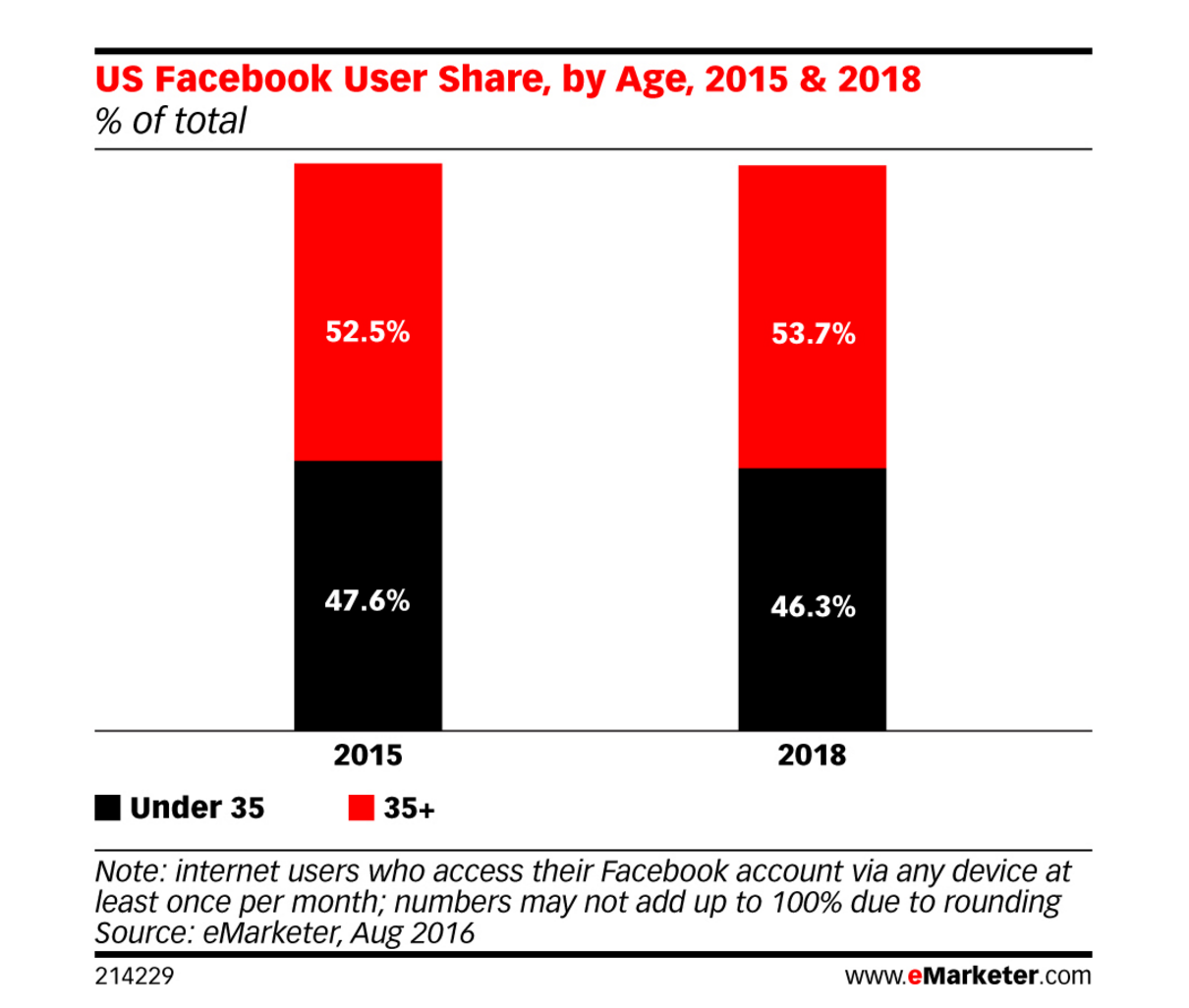 Although most advertisers target millennials (they are, after all, the technologically dependent), Facebook users of 35 years and older have more buying power. A recent college graduate with loans to pay, for example, is less likely to buy than an older individual with a stable job and income. 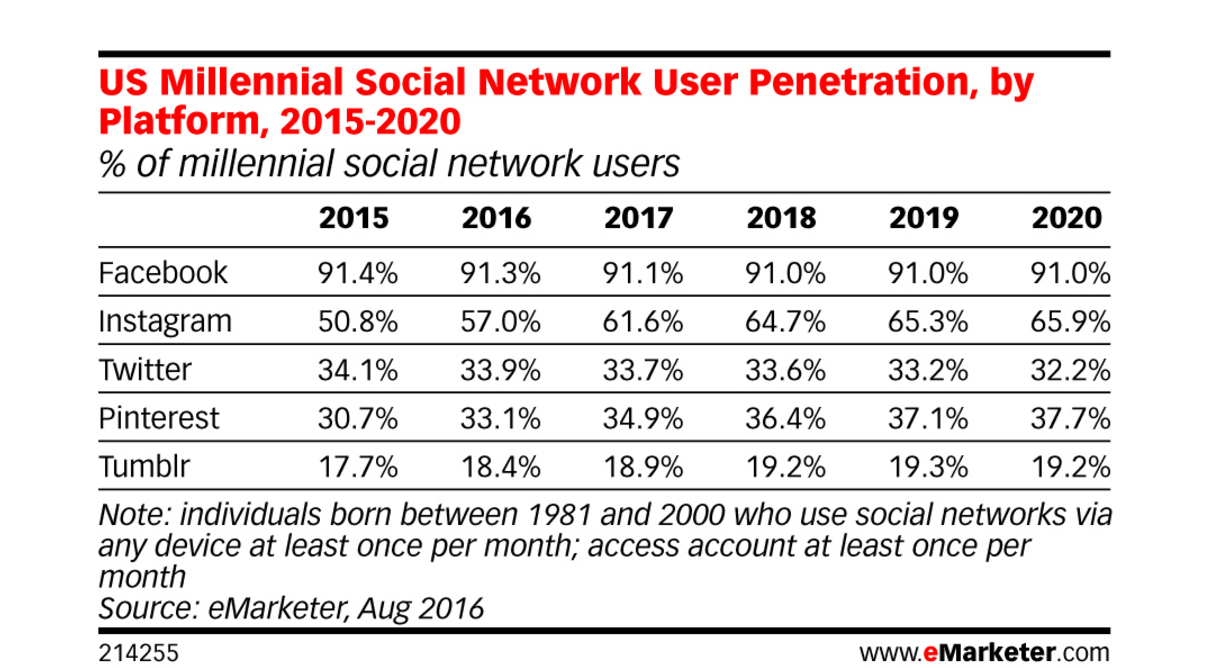 Although older users useFacebook more often, this chart shows that Facebook is still relevant to Millennials. Despite the number of social media sites available, most Millennials choose to use Facebook. Thus, advertisers’ chances of reaching a wider audience is higher on Facebook than on Twitter, Pinterest, or Tumblr. 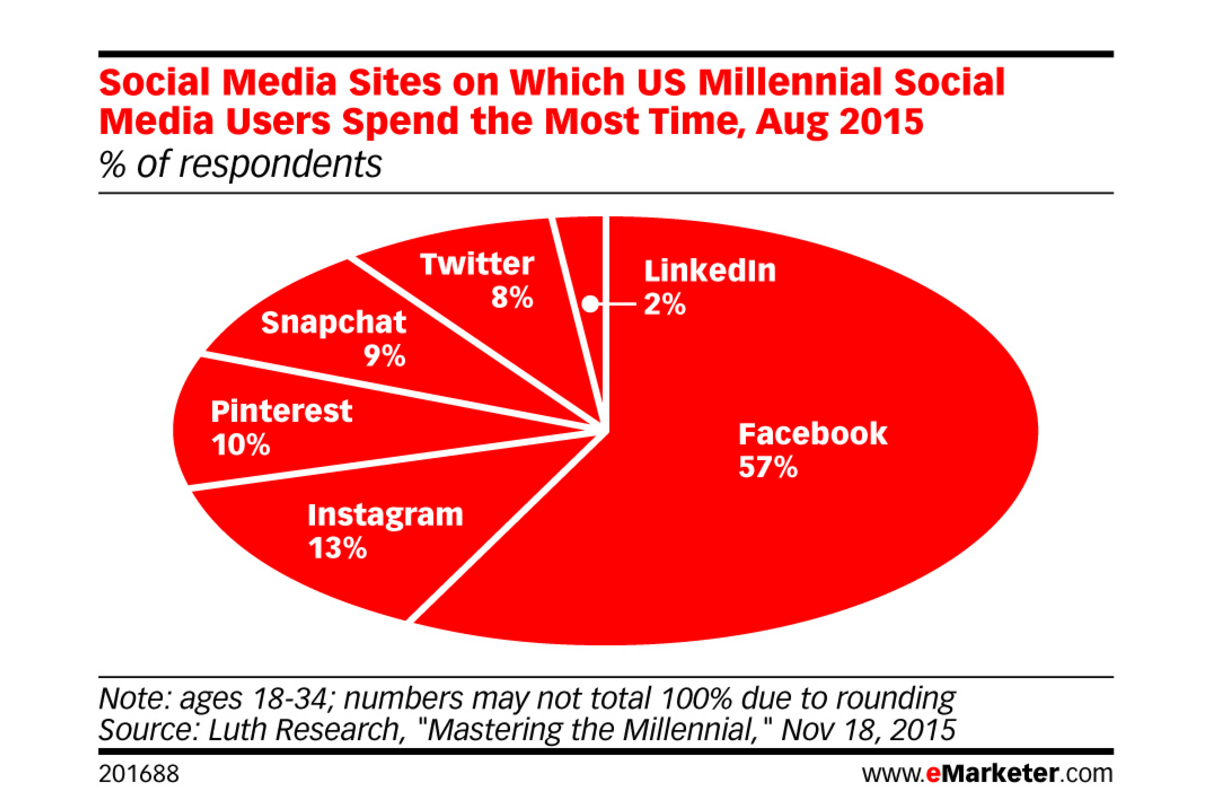 As this chart illustrates, of all the relevant social media sites, Millennials mostly spend time on Facebook. While 57% of Millennials stay on Facebook, only 13% stay on Instagram, 9% on Snapchat, 10% on Pinterest, 8% on Twitter, and 2% on LinkedIn. Not only does this debunk the myth that Facebook is outdated amongst the younger crowd, but it also proves that Facebook still perches on top of the social media hierarchy.

6. Users Are Flocking to Mobile 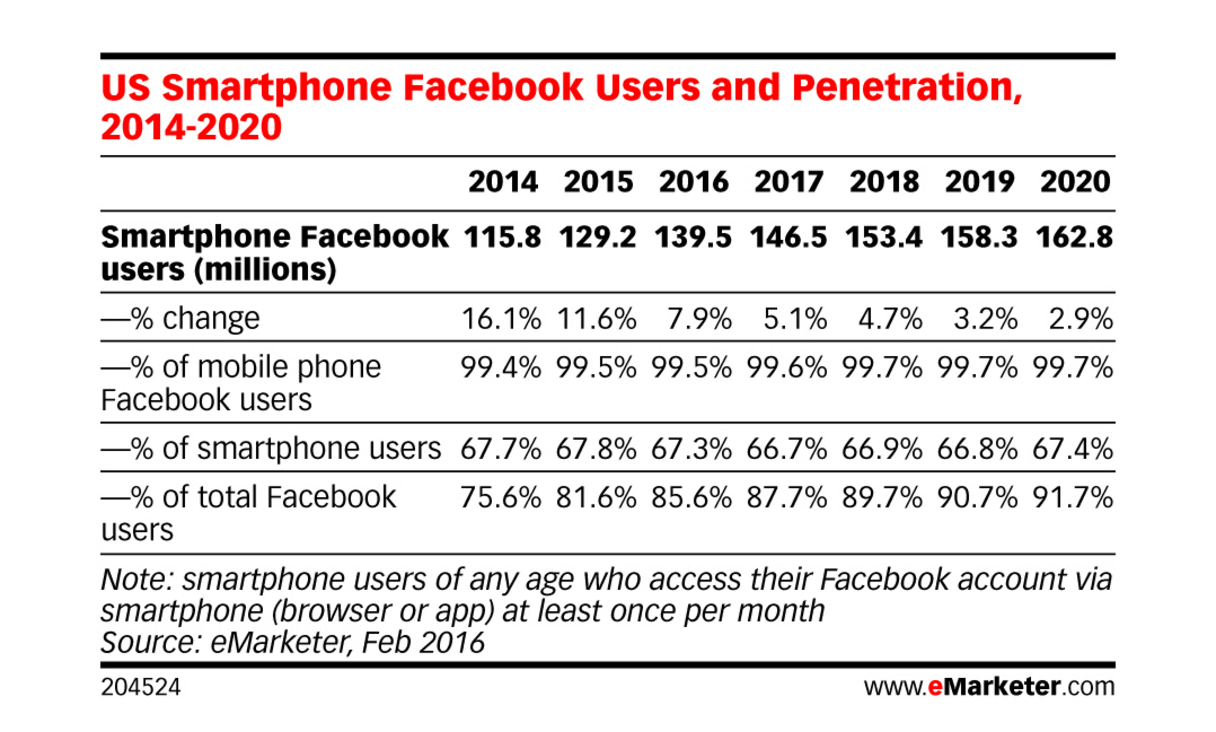 Facebook clearly dominates mobile. In 2016, 99.5% of users are on mobile. This amount brings good news for marketers, proving that Facebook can access those who are on the go, an ability that TV and radio does not have. Additionally, Facebook designs ads to be mobile friendly. For example, while side bar ads, an ad type only visible on desktop, can be easily overlooked, mobile ads fit the entire screen, giving users no chance to overlook or ignore it. 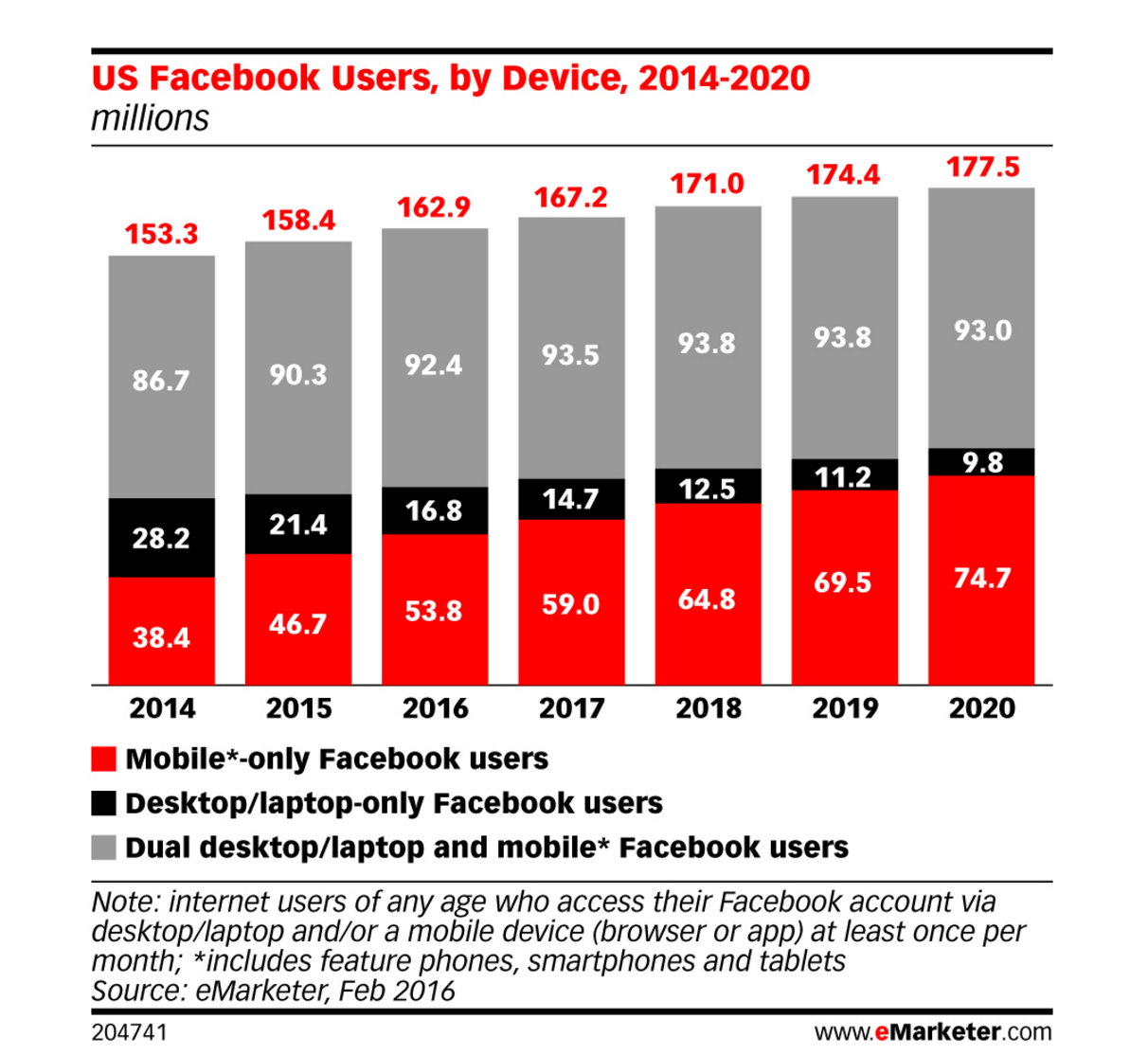 Although most users access Facebook through mobile, a good amount still access it through desktop. The dual use of both desktop and mobile can be accounted for the fact that users likely switch platforms for convenience. For example, users who want to send a long private message are more likely to do it through desktop than mobile. In contrast, scrolling through one’s news feed while walking around the house is easier to do through mobile.