When you are logged into a business account on a business page, when you hover over a post, you will see a box with the option to promote your post. Next, you will be guided as to who you want to promote it to— people who already like your page and the people in their network or your target audience that you have set up for ad auctions in the past or create one from scratch.

In addition to your target audience, you will be asked the maximum budget you are willing to spend to promote this boosted post (you may not necessarily pay that maximum number so keep that in mind) and how long you want this post to remain boosted.

Once a post is boosted, it is placed higher within someone’s newsfeed and within more people’s newsfeeds hence the name boost. Its viewership is given a boost.

A cool feature of Facebook is that it will often keep track of which posts have been doing well and will suggest which posts to boost. 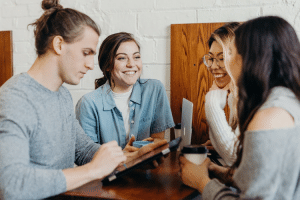 How do Boosted Posts Differ From Promoted Posts?

Promoted posts are ad campaign posts that you create within your Ad Manager, rather than selecting pre-existing posts from your page. While you can choose anything that has already been posted to include in the campaign just like a boosted post, promoted posts (due to the nature of being in Ad Manager) give you more options. From your targeting to your pricing to your bidding, a promoted post can be much more tailored to your needs rather than a boosted post.

That being said, you can keep track of how both boosted posts and promoted posts are doing within your Facebook Ads Manager.

Which is More Budget-Friendly?

Boosted posts are optimized to drive maximum engagement at the lowest price. Therefore, if you are advertising on a budget, boosting your most compelling post frequently is not a bad place to start. That being said, its affordability still comes at a cost.

That low price it sets means you do not have nearly the same amount of customization features as you may have with an ad campaign that features promoted posts. If done right with a thoughtful marketing strategy in mind, you can get a better ROAS (or return on ad spending) potentially with a promoted post if you have that option within your budget.