You are here: Home / Facebook / A/B Testing for Facebook Ads (How it’s Done and Why it’s Important) 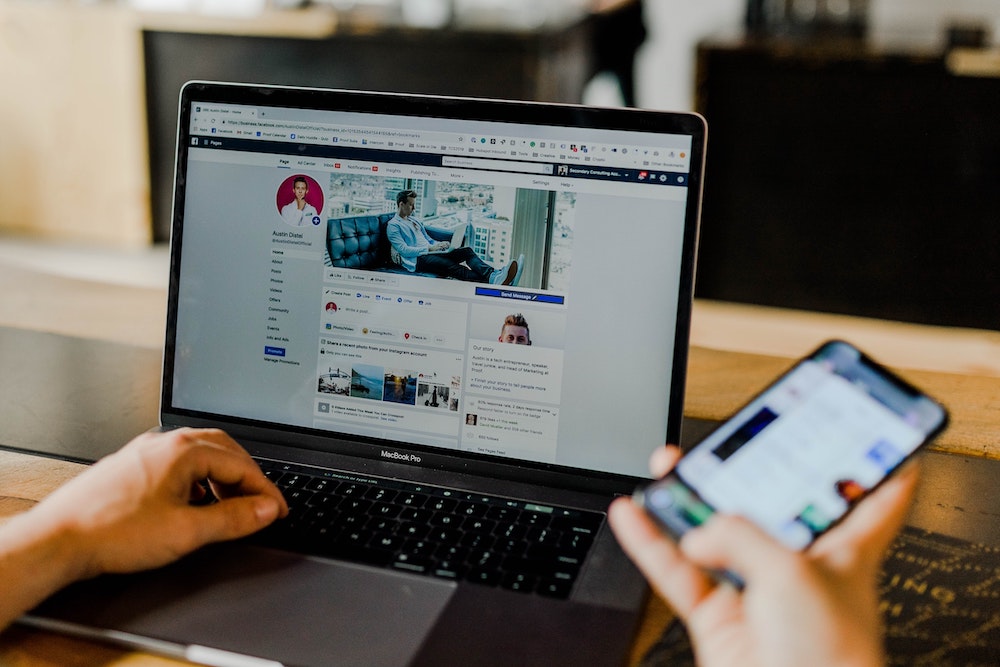 When you’re in charge of running Facebook Ads, A/B testing is a must. But some advertisers are unsure of exactly how to do it or have tried it in the past without success. Don’t let A/B testing overwhelm you – we’re here to help.

The point of A/B testing is to figure out exactly what resonates with your audience, from the wording you use in the ad copy to the background color of the ad’s main graphic. Without trying new elements and collecting data, you’re essentially guessing – and when you’re talking about your business and budget, you need to do more than simply assume.

What is A/B Testing?

Also referred to as split testing, A/B testing is when you test a specific element – one element – of your ad to see which version performs best. By doing this, you can figure out exactly what your audience responds to the most. You can then take that information and use it to guide future ads. Another perk of A/B testing is that your audience won’t get ad fatigue, which is what happens when they see the same ad over and over again, eventually ignoring it by default.

Elements you may want to change include:

Here’s a good example from Capital One. The only difference between the ads is the copy; everything else is the same. 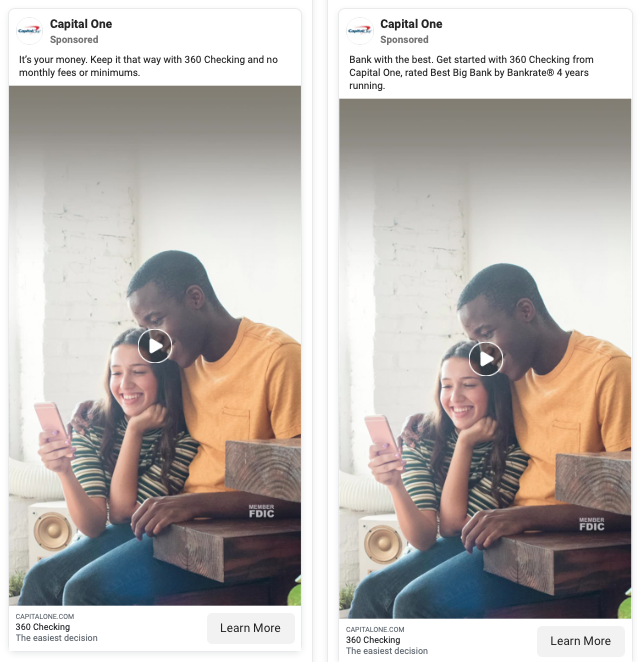 Why just one element at a time? Because if you change more than one, you won’t know which of the two (or more) changed elements your audience is responding to. Change one, collect your data, stick with the version that performs best, then change another. Rinse, repeat.

These ads from Bed Bath & Beyond have the same copy and CTA, but the media is different: 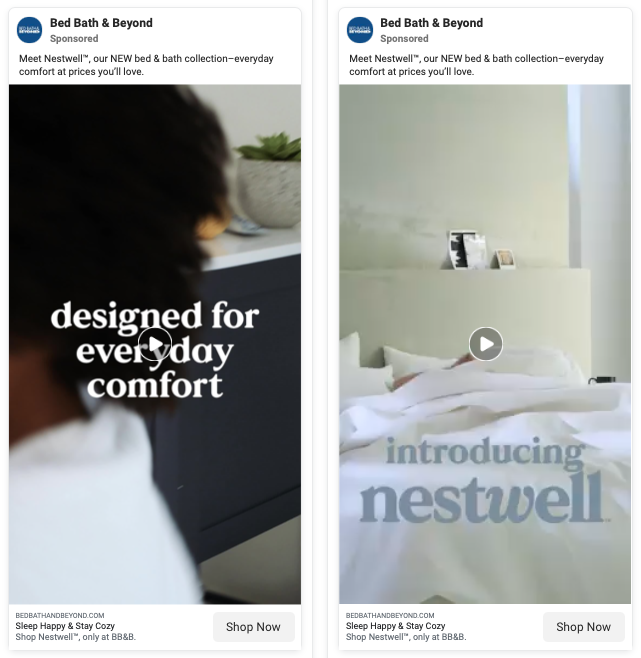 You don’t have to limit the tests to just this – for example, you can run A/B testing on four versions of the CTA button if you think that’s best – but these guidelines are a good start.

Also, when creating all of these ad elements, make sure they’re interchangeable. You should be able to run any headline with any version of the copy, for example. This means sticking to a similar style for all of your versions. Let’s say you’re going to take a youthful approach. All of the elements should support that – you wouldn’t want to mix a youthful headline and graphic with stuffy ad copy.

When you set up an A/B test on Facebook (more on that in the next section), you’ll change a variable. In addition to creative variables, like the ones covered above, you can also test the following:

Again, just like with the creative elements, you want to pick one variable at a time to test – so, audience or creative; placement or product set; etc.

When using Facebook Ads, you’ll create the initial Facebook Ad and then set up A/B testing afterward. This support article will walk you through the process and point you to more how-to guides – and since you already have the different versions of your ad ready to go, you’ve done the hardest part.

There are a few different ways to set up A/B testing in Facebook:

Can you run Facebook Ads without A/B testing them? Sure – and some may even generate pretty decent results. But whether you’re using carousel ads or Facebook messenger ads, if you don’t A/B test, you’ll never know if your ads could be even more successful – and that’s a big risk to take.

Also remember this: You have to be patient. Running proper A/B tests can take several months because you have to test each element at a time, working through every element of an ad. When handled methodically, though, this strategy can mean serious ROI on your ad spend.

Become a social media marketing pro with these 100 resources for Facebook Ads beginners.